I’ve been weaving the scarves for the summer show on the Megado. This is so that I can use 16 shafts rather than 8 and get richer results from the echo weave threadings. However, my Megado is not a very big loom. The weaving width is nominally 70 cm (about 27″) but in pratice I haven’t managed to thread anything wider than 60 cm (24″) because of the near impossibility of using all the heddles on all the shafts. After finishing, then, we’re looking at a maximum width of about 55 cm (22″); in order to weave anything more substantial I need to use the Delta. So, having been asked whether I could produce something like these recent scarf designs but in a wider format, I have had to give it some careful thought.

The advantage of the 16 shafts is that there is space for different things to happen. I have tried to illustrate this on the image below, though I can’t help feeling I would do a better job if I used a pencil and paper rather than trying to edit a draft in Photoshop! I haven’t done anything clever in the draft: the threading is an advancing twill with a parallel threading line offset by 4 shafts, the tie-up is a mix of 1/3, 2/2 and 3/1. For the zig-zag treadling I am not using the whole tie-up. I experimented until I found a slice of it which gave me the most contrast at the edges of the cloth* and then re-pegged the chain accordingly — I have left it as a slice for this image, however. The little skip at the turning point is just to help keep the float length down.

The important practical point is that the threading advances in a fairly tight-knit group, so that there are distinct sections which correspond to different things happening in the tie-up. The green ovals show an area of threading on shafts 11-15 which corresponds to a weft-faced section of the tie-up when we are near the turning point of the treadling. The same part of the treadling produces a warp-faced area for the ends on shafts 3 -7, highlighted by the blue ovals.

On 8 shafts there is simply less space for these distinct areas to form. It is not too bad with only one warp layer…

…because the slowly advancing threading provides some of that grouping of the shafts needed to produce warp-faced areas and weft-faced areas.

However, when you have two warp layers, even with a modest offset of 3 shafts, each little area of threading is suddenly spread out over most of the loom.

The result is a much less clear-cut distinction between warp- and weft-faced areas, and in practice the density of the warp means that the weft won’t get much of a look in once the cloth is finished. Not that you don’t get attractive effects! After all, that’s why we do these things, isn’t it? But is there anything I can do to make the draft above look more like the 16 shaft version below?

The most obvious thing which occurs to me is to stick to a single warp layer and either paint it or blend different solid colour yarns to get a colour-change effect going. I’d like to persist with the echoes, though, and try a few other options. For one thing, I haven’t tried fiddling with the tie-up yet. The tie-up in draft 2 is 1/3/3/1. Suppose we made that 1/3/2/2 and maybe spread out the treadling a bit?

OK, it’s beginning to be rather difficult to see what’s going on! The effect is much more subtle, but there are definitely broad areas of weft, of dark warp and of light warp. I don’t know how structured the pattern would appear in cloth form, but I would quite like to weave this one and see how it turns out.

Taking another tack, one of the nifty things about my dear old Delta is that it has 14 treadles. This gives me some freedom to play with the tie-up even more. Supposing I started with a 1/3/3/1 tie-up but shaded into something else part-way across?

Now I do like that. It’s like the 16-shaft version seen through a fog… And it is almost completely unreadable, so FYI the tie-up looks like this:

I’ve no idea how the 2/2 areas would work out in practice, so that’s a very strong motivation to weave it.  I’ve got a gazillion or so other drafts I’m tinkering with, but it’s dinner time!

* Why would I do that? Because the contrast between the face and the back of the cloth is one of the key things which makes this photo so effective.

“reducing to expand” was posted by Cally on 14 July 2013 at http://callybooker.co.uk

Exploring identity, sustainability and collaboration in partnership with makers from Nova Scotia.

When life gets between the weaver and the loom. 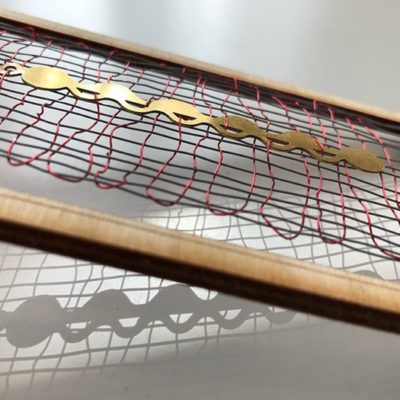 The new team gathered last week in Helmsdale for a sunny weekend of discussion, skill-sharing...

A fascinating week of textile talks, exhibitions and heritage in Upper Austria.

Venturing well outside the comfort zone of handweaving for the relaunch of my Bonny Claith...

Two structures and two improvisational designs on one painted warp.

Go behind the scenes!